The following contains some information on the Boys Brigade history and old boys letters from 1st Bangor Boys Brigade.

The Boys Brigade was founded in Glasgow on Thursday 4th October, 1883.

It was founded by William A. Smith who was a business man, part time soldier and a Christian.

William Alexander Smith was twenty nine years of age when he founded the Boys Brigade. He was born on 27th October 1854 at Pennyland, on the north-east coast of Scotland.

William Alexander Smith had the idea of turning his Sabbath School boys into a volunteer brigade, with the same military order, obedience, discipline and self respect of the Army, with religious instruction at the core and with games and enjoyment.

On 4th October 1883 the three leaders invited the boys of North Woodside Mission Sabbath School to join The Boys’ Brigade. The badge was to be an anchor and the Motto was to ‘Sure and Steadfast’ from Hebrews, chapter 6, verse 19.

The object was to be “The advancement of Christ’s Kingdom among boys and the promotion of habits of Reverence, Discipline, Self-Respect, and all that tends towards a true Christian Manliness”. The word obedience was added some 10 years later.

On the 26th January 1885 the Council of The Boys Brigade was formed, with a Constitution that set out the rules. By the time of the first annual meeting of the Council in October, there were twelve Companies in Glasgow and three in Edinburgh.

The first English Companies to form were the 1st London, the 1st Manchester and the 1st Armitage Bridges, on the 23rd November 1885.

The first Welsh Boys Brigade was the 1st Newport, founded in 1887.

At the end of 1887 William Smith gave up his job to work fulltime for the BB.

The first headquarters of the Boys Brigade were at 68 Bath Street, Glasgow.

In 1888 William McVicker visited Glasgow to learn all he could about the Boys Brigade and returned to Ireland to found the 1st Belfast Company. Within three years there were thirteen Companies in Belfast and nine others in Northern Ireland.

Hugh Brown was captain for an amazing 41 years and lead the company with great enthusiasm, devotion and skill. His friendship and leadership is remembered by hundreds of boys who came under his great influence.

In September 1988 Roy McCullough became captain and safely guided the company through a period of great changes in the life of a teenage boy.  Roy retired in June 2012, after a period of 24 years as Captain.  Our current captain is now Ian Marshall.

The following is an early photograph of the Boys Brigade Company taken at the front of the Church 29th June 1934. The tree in the background is still there to this very day. 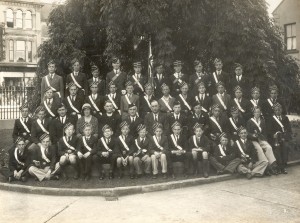 In January 2011 First Bangor Boys Brigade and 1st Bangor Girls Brigade held their 60th annual pantomime, Cinderella. The very first pantomime was held on Friday 27th January 1950 and was Ali Baba and the 40 Thieves; entrance fee of one shilling.

On the 21st March 2011, First Bangor Boys Brigade was saddened to hear of the death of James Stark. James was the first boy to be enrolled in First Bangor Boys Brigade in 1929. Up until the modern uniform was introduced boys would be marked on their uniform and compete each month to win the JB Stark belt. They would then wear James’ specially coated belt for the following month. James belt is now on display in the trophy cabinet in the Craig Room. 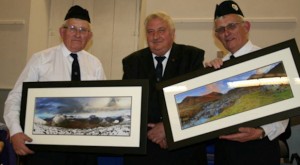 On Fri 4th April 2015, twins Robert & Ron Crangle stepped down as officers in 1st Bangor Boys Brigade after an amazing 50 years (each) of service as officers.  In January 2016 both Ron & Robert received the British Empire Medal in the Queens new years honours list for their service to the Boys Brigade.

We are grateful to Captain Brent McKee who sent us this photo of a newspaper cutting of his father Robert McKee from 1957. In 1957 1st Bangor Boys’ Brigade made history by becoming the first local company to have six boys receive their Queen’s Badge in the same year. From left Graham McIIwaine, William Friar, Robert Kennedy, Terry Neill, David Kirk and Robert McKee. Brent also sent us a photo of their family Bible which Robert received in the Boys’ Brigade. Sadly, Robert passed away on Nov 12, 1986. Brent is currently an officer with the Royal Canadian Air Force Cadets.

I was a member of 1st Bangor BB in the 1960’s, under Captain Hugh Brown; the officers I remember are;Dodger Mawhinney, Billy Brown (he was my lifeboy captain) Dennis Smith, Billy Gordon & Archie Agnew. I can see the other officers in my minds eye but alas, almost 50 years has elapsed.

I was in the band playing bugle with; Billy Houston, Kenny Adams, whose sister married my brother Johnny (Johnny-former captain of Groomsport BB) Roy Neill (he married my cousin Alison McFarland of the Girls Brigade) and emigrated to Canada. We met up years ago in Toronto when I was ships engineer with Ulster Steamship Company. Alan Gasby, Nicky Henderson, on the Big Base Drum. We won many times in Belfast and district band contests. I remember vividly marching down to the local church at camp in Aberfoyle Scotland; not too far from where I live now, and all the locals coming out to see us.

I have written a book entitled ‘The Apprentice Boy’ about serving my time in Harland & Wolff and which fondly recalls all those good times spent in the BB chasing the much coveted badges; first Aid, band, drill marching, wayfarers, attendance (only allowed to miss one drill night or bible class!) then there was the panto – always good for a laugh but built up our confidence. Not to forget Saturday night – games night, and Mrs Brown’s sausage rolls and beans. Run home quickly to catch match of the day, or Archie would give us a lift in his old black Morris Oxford. Football, I was goalkeeper for years, when I met up with Roy Neill in Toronto, he recalled a game against an Ards team in which every time he scored I let on in! Much to the delight of the ship’s company.

What good memories; what a good grounding. I am retired in Nain now, ended up as engineer in the offshore construction yard in the Highlands, after being at sea and working in Africa.

If you are an old boy of First Bangor then email us, we would love to hear of your memories.